As today starts the week of Medical Transcriptionist Week 2015, (May 17-23), I proudly wear this below imaged shirt I purchased a few months ago.  People ask me often, what is a medical transcriptionist?  Well most people when I begin to explain to them in laymen’s terms that I 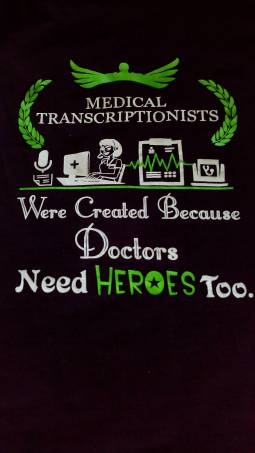 transcribe what the physician dictates (records) regarding your medical health record, they immediately will say, “Oh yeah, I know what you do.  That must pay pretty well.  How can I get a job working at home?”  The majority of the time, they are confusing it with medical billing or medical coding and actually have no clue as to what we do.

As I stated last year in my blog during Medical Transcription Week, there is never a really big ‘hoopla’, no real fireworks or parties where the physicians or hospitals per se (whom we transcribe for) really recognize or celebrate what we provide to them.  Thanks to the many MTSOs (medical transcription service organizations), who, over the years have tried recognizing us by providing gifts, tokens, and continuing educational tips to celebrate what we do, the MTSOs and/or AHDI, the nationally recognized association for medical transcriptionists have decided to greatly diminish the salaries of many MTs over the recent years along with outsourcing to other countries, leaving many MTs feeling as though they work in a ‘sweat shop’ or on a ‘production line’. In my opinion, being a medical transcriptionist is a very highly skilled profession – a profession that determines the life and/or death of a patient in what is accurately documented in their record and should also be recognized as such and treated as such .

Even though we MTs always work “in the background” so to speak, or previously worked in a hospital’s ‘basement floor’ (some still do work in the hospital setting) or currently ‘work at home’, we are the forefront or the main engine for your official medical record (also now known as) clinical documentation. We have a computer, a foot pedal to play, rewind, play forward what the doctor dictates, and we have headphones (to listen to the recorded dictation) along with a keyboard to type, all being used simultaneously to create a patient medical record.  That in itself is not an easy task for lots of people!  In recent years, voice recognition, (i.e., instead of manually typing all of the dictated report, it comes over as voice recognized of spoken words onto the computer what the physician has dictated) has been meant to take the place of a medical transcriptionist, along with pretemplated EMR (electronic medical records).  Supposedly, EMR and voice recognition were created to be a ‘quick fix’, a much easier way of  diminishing so much paperwork, increasing productivity to the transcriptionist . As the world’s population has multiplied in the last 20-30 years, including the ‘baby boomer’s of this country who make up a large percent of the aging population right now, EMR and voice recognition, instead of the traditional transcription was supposed to triple the work that a transcriptionist does by eliminating a backlog of charts we were transcribing.  It also was established to provide electronic medical records at  a national scale – no matter where you lived, any hospital, any clinic will be able to pull up your clinical documentation report.  Maybe later this week in recognition of MT week, I will get into the pros and cons of both voice ‘wreck’ (as we like to call it,) and EMR implementation here at You Empower Your Health.

In the meantime, we will quietly celebrate MT week in our own way with the majority of us loyal MTs  continuing to work diligently – maybe 6 or  16-hour days, researching words and their meanings, researching doctor’s names, and facilities to get the correct spelling, listening at the doctors cough, belch or sneeze in our ears, putting up with the background noises of babies crying, people talking and yelling, physicians walking and dictating via their cell phones, dictating in the elevator, walking outdoors or in their vehicles, nursing their babies at home with dogs barking, music blaring  – all in the name of caring about an accurate patient medical record, a continuously learning knowledge of medical terminology and have a TRUE love of medical transcribing!  Happy Medical Transcriptionist week!!

2 thoughts on “Medical Transcriptionist Week – May 17-23”